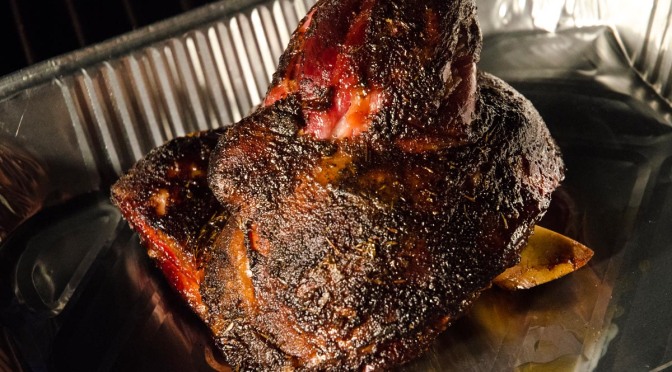 I love smoking! There’s something about the smell of smoke in the air that makes me hungry and that didn’t happen before my passion for outdoor cooking to hold. On this day I’m smoking lamb shoulder and pork shanks. I’ve smoked lamb shoulder a few times and it’s always fantastic. This time I decided to pull the lamb shoulder for tacos which is slightly more unusual for me. Even more unusual are the pork shanks. Never cooked them. Never eaten them. Decided to cook them similarly to the lamb and see what happens.

First I had the lamb shoulder. Slathered with garlic paste and then rubbed with a blend of Mexican inspired herbs and spices found in the cupboard. Including smoked paprika, chilli powder, Maldon salt, pepper, cumin and mixed herbs.

For the pork shanks I decided to rub with a mix of Angus & Oinks ‘Porky White Chick’ and ‘Hot & Hostile’ rubs. I had no plans for how I would serve the pork shanks. I cooked them for fun more than anything. Wanted to see how they would cook. The only thing I was uncertain of was whether or not to remove the skin. I ended up deciding to leave it on in hopes that it would protect the meat and prevent it from drying out. I ended up eating them for tea the next day. Except for the ‘small’ amount I had to ‘test’.

The lamb shoulder and pork shanks would be cooked on the UDS (ugly drum smoker). I use Resilient Woodlands Charcoal for all of my cooks now. Whether hot and fast grilling or low and slow on the smoker. I’ve experienced no problems maintaining a steady temperature over long periods of time. I also added a little silver birch and cherry wood.
I set the smoker up at a low temperature of around 115c and 120c. Recently I’ve found myself less concerned about keeping the smoker at a precise temperature. Provided that it maintains a steady temperature around where I want, I’m happy. I put the meat on the smoker and got them cooking.

Three hours later the lamb and pork were coming along nicely. The meat had started developing some sort of bark and taken on some nice colour. already I was getting excited to eat this. I did spritz the meat now and again with a mixture of water and siracha. No idea whether that was worth doing but though I might experiment.

Towards the end of the cook I decided to cook some dirty onions and peppers for the tacos later. I buried the onions in the coals and let them cook until the lamb was ready, moving occasionally to prevent incinerating them. Later I would toast the tortillas over these coals to give them that extra charred flavour that works perfectly with the barbecued meat.

Over seven hours after starting the cook, the lamb and pork were ready withing 20 minutes of each other. Couldn’t have asked for the cook to go any better. The colour on the meat was incredible and it was unbelievably tender when probing.

Whilst the lamb rested, I toasted the tortillas and prepared the other toppings before pulling the meat. It pulled apart very easily and I couldn’t have hoped for a better result.

For the tacos I had prepared the dirty onions, dirty peppers, lambs lettuce and soured cream. I also had siracha for a little extra heat. You’ll have to excuse the poor photographs of the finished product. I’m normally trying to take photographs in a rush and in poor lighting at this point. On this occasion I was just to impatient. Hopefully you can still appreciate how it must have tasted.

I didn’t take any photographs of the pulled pork shanks but they were also great. Pulled very well and tasted brilliant. In hindsight I should have either crisped up the skin or considered removing it.