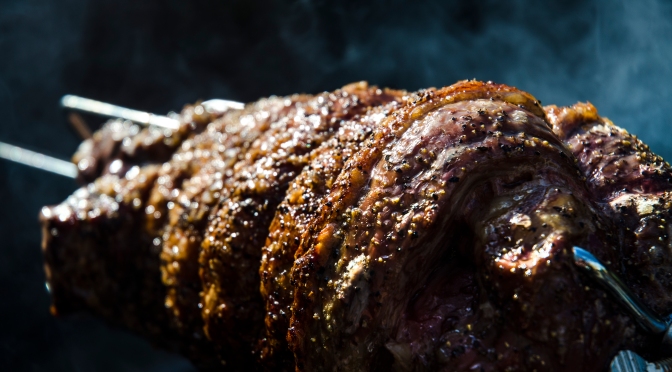 So I’ve always wanted to own a rotisserie.  I’ve always been unsure what rotisserie I should get.  The Thuros rotisserie looks fantastic but on my Thuros T1 I would be limited to smaller joints of meat.  I could have bought a rotisserie kit and attached it to my barrel BBQ but in all honesty, I don’t think I would know where to start.  So when I saw that the Jumbuck Rondo Rotisserie was reduced to £40 in Homebase a week before my birthday – there was really no better option.

When I unboxed the rotisserie on my birthday I was actually surprised how sturdy it felt.  Ok it’s not thick steel but for £40 I certainly couldn’t complain.  You would normally expect to pay that much for the rotisserie kit alone on a website like Amazon or Ebay.  Once I had build the rotisserie, I contemplated making some modifications.  Many other users have drilled holes in the ash tray and/or dropped the grill down to increase airflow to the coals.  Some have also added a wind deflector or a lid to speed up the cooking process.  I decided that I wouldn’t make any modifications to the Jumbuck at all.  I figure that so long as I have some fire and heat underneath a nice chunk of meat… It’s going to cook.  Which brings me onto the next question.  What do I cook?!

Most people have kept things simple for their first rotisserie cook.  The classic spit roast chicken.  There’s nothing wrong with that but to try change things up a little I decided that I would try something different.  My sister asked if I would like some meat for the BBQ for my birthday so I said yes.  I gave her free reign to pick something from the butcher suitable for the rotisserie except chicken.  What I ended up with was a nice big piece of rolled beef middle rib.  Not something I’ve ever tried before but I was certainly happy to give it a good go.  I rubbed the beef with a little garlic paste, Maldon salt and black pepper and set about lighting some coals.

Nothing complicated when it comes to lighting the BBQ.  I laid a small amount of mixed hardwood charcoal from Resilient Woodlands on the Charcoal tray.  I then filled a large charcoal chimney with more of the same charcoal and started it with a wood wool fire lighter.  Once the coals were hot I poured them into the charcoal tray and gave it a few minutes to get going before attaching the spit.

Once I was satisfied that the charcoal was nice and hot I brought the spit to the BBQ.  Now before we go any further I thought I would let you know about a handy tip  I picked up the other day.   Before I can start the motor and get the food cooking I need to make sure that the spit is balanced.  This ensures that the motor isn’t put under any unnecessary stress and that the spit rotates smoothly.  If the spit doesn’t turn smoothly and evenly the meat will not cook evenly.   In order to ensure that the spit is balanced we should attach the counterweight supplied with the Jumbuck.  In order to do this – Put the meat on the spit and then the spit onto the BBQ without putting it into the motor and let it drop. The meat will naturally swing to the heavy side down. Then put the counterweight on the other side. You should be able to turn the spit and wherever you let go the spit stays put.  If it does you can adjust the position of the weight on it’s holder.  I used this tip on this cook and it worked perfectly.  Once the spit is balanced we can get this food cooking.

My initial concern after putting the meat on to cook was that it would either take too long to cook or not cook at all.  I had put the meat on the top setting and immediately wondered if I should move it down closer to the coals.  Quite quickly after that I decided that this was my first attempt at cooking anything on a rotisserie and I should just see what happens.  To help it along I added two decent sized chunks of oak wood.  I hoped that this would add a little more heat and flame to the cook but also give the beef a nice smokey kiss.  Within 10 minutes I knew that this was working and I knew it was going to be fantastic.  The beef started to get a nice colour.  The outside had started developing a fantastic crust whilst continually basting itself with the flavourful fat that was rendering from the beef.  The best thing about cooking with the rotisserie besides the meaty goodness?  It takes barely any fussing at all.  Just load it up with hot coals, put the meat of the spit, sit back, relax and watch the meat spin round.

After around 1 hour 30 minutes the internal temperature was right where I wanted it to be.  There was nothing left to do now but take the meat off, let it rest and then slice.  I was really excited to see how this was going to turn out.  Upon slicing the beef I thought I may have overcooked the beef but it tasted really fantastic.  I was seriously impressed with the performance of this rotisserie.  No modifications, no adding more charcoal and I had a fantastic meal to share with my family.  I just can’t wait to cook something else on this brilliant piece of kit.  If you are one of those undecided, I can’t recommend this enough for this price.  Give it a go!