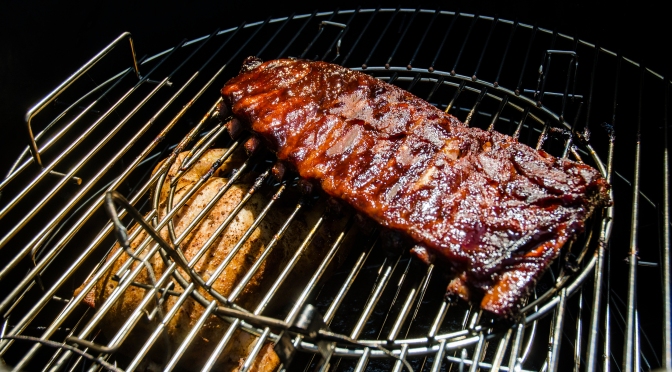 This cook was a simple one.  Not too adventurous but it’s definitely one of my go to smokes.  Maple glazed pork ribs and whole chicken.  As much as I do like to experiment, it’s sometimes nice to stick to what you know and like.  This is one of those times.  Below is the link to a video made for this cook and some details of what I did.

In this cook I used two rubs.  Both rubs used in this cook were made by me but I’ll give details of the ingredients now.

Perfect for pork in particular but also chicken and anything else you fancy trying it with.  Best for low and slow/indirect because of sugar content.

Great with chicken but also great with pork and more.  Well suited for hot and fast grilled food because it contains now sugar and loads of flavour.

This isn’t really a recipe but an explanation of what I do.  For the ribs I always go hot and fast on the UDS.  Obviously apply the rub first and cook between 125c and 135c is the aim.  I’ve gone as high as 150c and had perfectly tender ribs.  I usually cook the ribs for 2 hours unwrapped first to get some smoke and then wrap in foil.   In the foil wrap I include demerara sugar, maple syrup, butter and bbq sauce.  I normally use Meat Lust BBQ Mop Sauce as I’ve always found it great as a base.   Cook for 1 to 1 1/2 hours in the wrap depending on the size of the ribs.  Place back onto the smoker unwrapped for another 30 minutes, regularly mopping with mop sauce.  My mop sauce usually contains Meat Lust BBQ Mop Sauce, apple cider vinegar and maple syrup.  Once the ribs are done and the glaze has set, remove from the BBQ and serve. I’ve never had a bad rack of ribs cooking them this way and so I haven’t really seen the benefit of cooking them at a lower temperature.  These ribs were smoked using sweet maple wood from Resilient Woodlands.  Sweet maple gives a fantastic tasting smoke and I would definitely recommend giving it a try.  This was also my second time using lumpwood charcoal for low and slow cooks over a long period of time.  So far I’ve been extremely happy with how it has performed.  Lasts almost as long as briquettes without the additives and extra flavour.  The only issue I had with this cook was it could have benefited from a little more smoke.  I added one chunk to the basket at the start of the cook.  After seeking some advice from the CountryWoodSmoke Facebook group I will add at least 3 chunks on future cooks.

The chicken was probably the most succulent and juicy chicken I have ever cooked.  I put the chicken on around the time I wrapped the ribs.  Same temperatures obviously.  The only thing that is lacking when cooking chicken this way is the crispy skin.  I could have ramped up the temperature to crisp it up but honestly it tasted fantastic and I was hungry.

Please let me know if you have some tips on ways I can make this even better but in the mean time…. here’s some photographs from this cook. 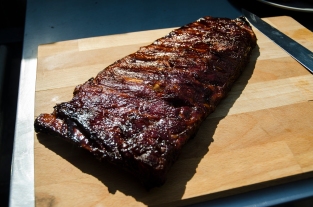