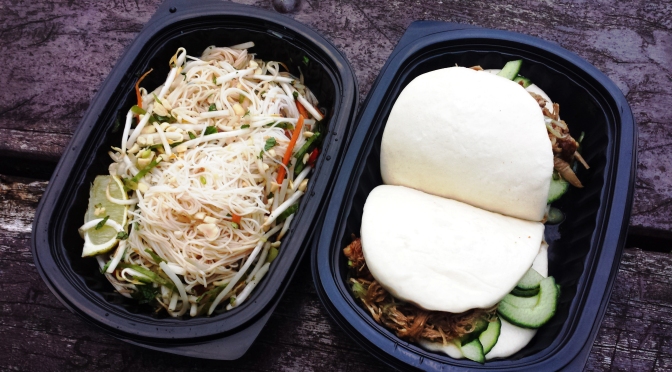 Recently, I had the great opportunity to try something new.  Hokkei.  A new twist on the traditional Chinese takeaway, Hokkei serves Hong Kong inspired food, utilising authentic ingredients and innovative cooking techniques in order to deliver the best dishes possible.

The chefs, Larking and Dale, were both in fact MasterChef competitors and through the show became good friends.  Armed with the know-how and passion for cooking, they decided to open a Chinese takeaway with a difference.  No “Untraceable and unethical ingredients, low quality, stodgy food and sloppy service”.  Surely their food must be brilliant right?

Here is the menu:

Despite the fact that the menu has far fewer options that a traditional Chinese takeaway, I still had trouble deciding what to order.  Everything sounds fantastic!  From beef brisket Baos (pronounced “bows”) to noodle broth or slow cooked ribs.  The menu offered plenty to be excited about.  In the end, I chose the Confit Peking duck Baos with star anise and cucumber.  As a side, I ordered Rice Noodle Salad from the Dim Sum section of the menu.

First of all I will discuss the Baos.  It isn’t something that I have ever tried before and I am pleased to say that I would like to eat it again.  The ‘buns’ were light and held the meat pretty well.  The filling was full of flavour.  The peking sauce adding that sweet flavour that we all know and love.  The cucumber adding much needed texture to the meal.  I ate both of the Baos with no problem at all and thoroughly enjoyed it.  The Peking duck Baos was very good, however, I wish I had ordered something else. 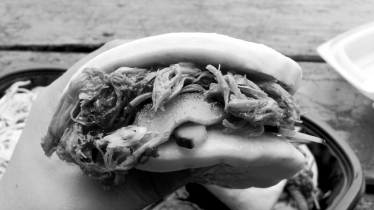 There was no problem with the flavour of the dish, but perhaps the Peking sauce was a flavour I am already too familiar with.   Which is perhaps what I should have expected.   In hindsight, the Beef brisket, panko breaded chicken or even the tofu would have been more adventurous options for my taste.  Nevertheless, I would definitely recommend that you try the Peking duck. 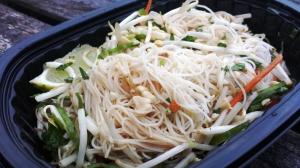 Surprisingly, the rice noodle salad was the highlight of the day.  It is served cold, which for some might be strange but actually it’s perfect.  Incredibly fresh tasting, fresh ingredients and full of flavour.  I thought it was brilliant.

The rice noodles are served with fresh greens and peanuts in a tamarind sauce.  The tamarind sauce added a sweet and sour taste to the salad that I definitely enjoyed.  There was nothing left over in that bowl.  I’m not certain that I had tasted tamarind before and if I’m honest – It was something I only really associated with Indian cooking.  Perhaps highlighting the fact that I am no expert!

The only issue I had with this entire meal could be considered minor – nevertheless, I believed it should be mentioned in my ‘review’.  As delicious as my Baos was, I did come across two rather large bones.

At least large considering I didn’t expect any at all.  I’m certain that this is unusual and I hope that it doesn’t discourage you from eating Hokkei’s food but I felt that it should at least be mentioned.  The dish is still definitely worth a try.

Roath park provided an excellent backdrop to sit and enjoy a really delicious meal.  I look forward to my next order fromHokkei and if you do or already have tried their food… let me know what you thought.